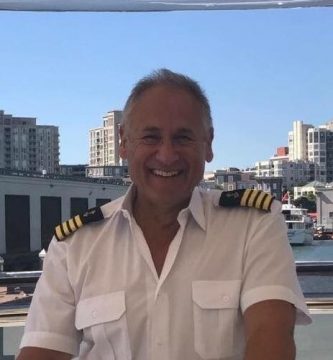 Larry Jacobson first stepped into a small sailboat at age 13, taught himself to sail, and was hooked. He had found his passion, and like many sailors, dreamed of sailing his own boat around the world. He kept that dream alive, and 33 years later sailed out beneath the Golden Gate Bridge, turned south, and began his circumnavigation. After six years, 40 countries, and over 40,000 nautical miles later, Larry’s dream came true as he returned to his home port of San Francisco.

How did Larry’s sailing career begin, and what was his inspiration to sail around the world? Get inspired to make your own dreams come true—listen to Larry’s interview starting at minute 3:30–just click here.

Larry Jacobson is a Certified Dream Coach, Retirement, and Leadership Coach. He understands from his own experience what it takes to make your dreams come true. His self-guided video programs and personal coaching are available to you – Sample three FREE Modules of his “Lifestyle Planning Program” at www.BuoyTraining.com .
Larry is an avid sailor with over 50,000 blue water miles under his keel. He is author of the six-time award-winning memoir of his circumnavigation in the book, The Boy Behind the Gate. He lives in the San Francisco Bay Area and welcomes new friends and inquiries – Connect and Follow Him him on LinkedIn , FaceBook, or www.BuoyTraining.com .If you would like to explore being coached by Larry Jacobson, Click Here to contact him!
New Book Launching in a Few Days: Let’s Go!: The Adventures of Skip and Kanek Investment & Wealth Institute Podcast – Interview with Larry Jacobson